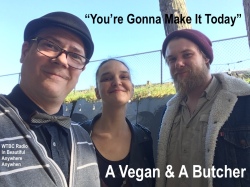 A Vegan & A Butcher: “You’re Gonna Make It Today”

This is my interview with A Vegan & A Butcher (Summer Keightley & Derek Boaz), conducted at the Space Concert Club on 12 March 2018. 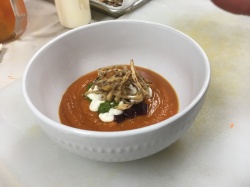 Instant Pot, how Summer got interested in cooking, cooking shows, how Derek got interested in cooking, making carrot stew, The Glad Cow Cookbook and its future sequel, Summer & Derek meeting, bringing punk and DIY into the kitchen, planing their first event at The Space, demystifying the unglamorous parts of kitchen life, the eating habits of chefs, vegan yogurt, Rob Groves and the deep fryer, the problems of ambitious meals, the music in the kitchen of Vegan & A Butcher, Derek playing in Mouth, the Isle of Treasures Garden, Vegan & Butcher Brunch May 20th. 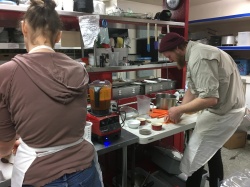 *I do mention in the show that we should include some pictures of The Space Concert Club, but I realized that our previous episode with Sadgasm highlighted what the place looks like when a band plays. I do suggest that you look at the photos on their Instagram & Facebook, where there are a number of photos of their shows and brunches.

This site uses Akismet to reduce spam. Learn how your comment data is processed.