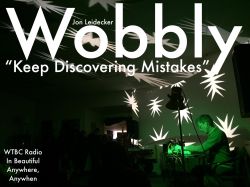 This is an interview with Wobbly, recorded over Skype on 9 November 2017.

This program is sponsored by J Jean Portraits, & Peggy’s Vegan Hot Sauce. For more information about our sponsors, follow the link. We are also now a part of the They Might Be Giants Dial-a-Song Network!  This week’s TMBG DAS is, “Dunkin Of Course Of Course.”

Familiar, working with Dieter Mobeius, Negativwobblyland, 2012, touring with Fred Frith, working with Tim Story, Music From the Hearts of Space, Cluster, Mobeius’ directness and studio habits, collaborations vs. solo work, People Like Us, the benefits of working with others, more solo vs collaborations, playing recordings of other people as art, expressing a culture’s voice in the art we make, joining Negativland and working with them, honing your own creative voice, going to Negativland camp, Variations Radio Program and the culture wars, Kenny G (ubu.com), artist’s rights and the ownership of culture, the concept of the author, self expression through social media and the evaporation of owning our own expressions and data, the changing politics of culture jamming, post-vaporwave data profiles dictating our reality, artistic merit slipping away as time moves on, generational sea-changes, culture tacking to the libertarian center, It’s All In Your Head, the changing technology and gear, 100% iPad album, his residency at the S1 Synth Library in Portland, the ergonomics of devices (for the audience), a Don way of doing things, more history about the original booper from 1974, The Booper Symphony, the live Negativland Experience, Over The Edge with Wobbly & KROB, Puzzling Evidence, Don as teacher, doing radio with him, making art and remaining open, how to stay confused, listening as a creative tool, a live performance every time you press play, making a “mix” show on live radio and why that’s difficult, radio and music reporting killing the mix show, KPFA supporting mix radio, approaches to sampling, discovering sample sources, natural record shopping habits, finding music under your own power, our varying radio styles, Over The Edge stories, archive.org’s collection, more episodes being uncovered, Tim Maloney’s role behind the scenes, Don’s vision for the show, KROB’s role behind the scenes, Wobbly’s new record Monitress, the surveillance state, a Zeena Parkins record of duos, Sagan’s second album in 2018, Cosmos, Who Speaks For Earth?, pseudo-obscurity, the impulse behind these interviews, working on the new Negativland Record.

This site uses Akismet to reduce spam. Learn how your comment data is processed.